This is a tale of plant murder, heartbreak and moving on. My plant tally is up to 30 in my tiny ass apartment and I swore I would stop buying more because I don’t want to become some crazed plant lady—but let’s be real—it’s mostly because I’m running out of space. However, as a creature of self-enablement, when I discovered I killed my pin stripe calathea (RIP, I loved you for two years), I gave myself permission to indulge. Behold, derp faced Wei with one of the new plants.

Yes, perhaps this was #toosoon in the plant grieving process and perhaps my sorrow drove me to “just check out” some shops I hadn’t visited in a while. MAYBE THESE WERE REBOUND PLANT PURCHASES BUT I’D LIKE TO THINK NOT.

As if the murder of my calathea wasn’t enough, I suffered from another heartbreak this week. The rare mini monstera (Rhaphidophora Tetrasperma) that I ordered from Thailand came in this state.

It simply took too long to get through customs and make it here.

I’m still hopeful I might be able to save parts of it but alas, *cue “Quit Playin’ Games with my Heart” by Backstreet Boys.* Such is the risk though when smuggling plants in illegally.

Reeling from my plant despair, I went to to Tula in Greenpoint, Brooklyn. They have a great selection of rare plants at their airy warehouse location (I’ve been to their pop-ups and truck before which are also stellar). I had to tear myself away from getting the rarer $100+ plants while hoping to find a mini monstera.

Ultimately, I was drawn to this $25 Fernleaf Cactus (Selenicereus Chrysocardium) for its elegant, unique look. I’ve placed it temporarily here on the shelf above my bed but I’ll need to repot it.

Next, I strolled to Greenery Unlimited (also in Greenpoint) but wasn’t too tempted by anything. Well…I was looking at a $40 hanging Philodendron Brazil to replace my long dead pitcher plant (THEY ARE FREAKIN’ HARD. They require distilled water, always moist and frequently sprayed due to their natural jungle/swamp/humid environment) but didn’t want to pay that much.

I thought that was the end of my plant excursion. I had walked past Peter Pan Donuts earlier and well, I fuckin’ love donuts—right up there with burritos and plants. I made sure to walk past it again since the L is a nightmare and I had to walk to the Lorimer Street Station anyway. I got two donuts, wolfed down one with my iced coffee and continued my journey back home. Then I walked past Screamer’s Pizzeria, did a double take and proceeded to self-enable again with a delicious slice (WHAT?! I ONLY ATE 1 OF THE 2 DONUTS. IT’S OK TO GET A SLICE OF PIZZA). I freakin’ swear to gawd, vegan pizza sounds whack but this place is amazing.

I walked past Xi’an Famous Noodles and ok, give me points for self control. I did NOT stop in (but ok, maybe I already had it a few days before).

Wow, getting off track. Anyway, on my way home with apparently an insatiable appetite, I passed by Soft Opening plant shop and decided to drop in—perhaps cos my brain immediately thought of soft serve and short-circuited. I’m glad I did though because unbeknownst to me, I was on a cactus kick. I got another plant in the same family as the Fernleaf Cactus. This lil Fishbone Cactus (Selenicereus Anthonyanus) with a mystery plant thing (I forgot the name—help me if you know) was already potted for $25! 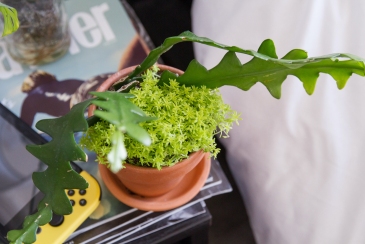 Nearly to the subway stop, I passed by one of my favorite plant stores in NYC, Crest Hardware. I love this place so much. I found this adorable $8 Philodendron Brazil which was perfect cos I didn’t need the bigger $40 one I had seen earlier in Greenpoint. I dig the coloration of neon leaves. Here it is in a pot I already had (RIP, previous plant that lived in that pot).

So yeah, perhaps I went on a plant spree out of disappointment. I’ll do what I can to not kill them—starting with avoiding pots without drainage despite putting rocks on the bottom. And hey, at least these new acquisitions weren’t smuggled into the country illegally.